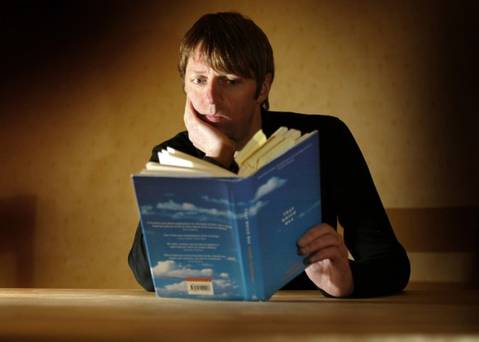 Last night’s One City One Book turn was a solo gig from Glenn Patterson, after Lucy Caldwell was hauled off to London to pick up an award.

The success of the Good Vibrations movie, which he co-wrote, has not only produced its own feelgood factor but also shone a light into the very dark space that was Belfast in the late ’70s.

Billed as a talk about the film and featuring some of the music that inspired it, the evening soon took on the relaxed informal vibe of a pleasant evening around Glenn’s gaff, listening to some of his favourite old records.

He started by emphasising the vital importance of the Shangri-La’s Out In The Street as both an influence and the film’s abiding theme.

Then like all the best conversations about music, he merrily jumped from stories like Johnny Thunders calling Terri Hooley ‘that mad one-eared bastard’ to an erudite run-down of some of the Belfast scene’s lesser known bands.

So it was great to hear Protex’s Don’t Ring Me Up reminding us that a lot of Ulster punk sounded like speeded up Country and Western.

The ghost of John Peel hovered, not just in his relationship with the film, but in DJ Patterson’s technical battles with the record player, with songs starting in the wrong place and at the wrong speed in classic manner.

Above all, this was a tribute the enduring qualities of Mr Hooley, and an eloquent defence of the eternal ability of three chords to thrill.

Powered by Precept IT